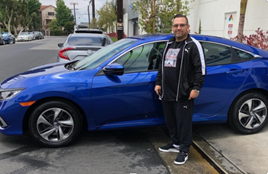 “I love being of service to the same community that raised me. Turning pain and trauma into triumph. I’ve accomplished some of my own goals, and my heart is fulfilled day by day by pushing others to achieve their own goals.”

Before enrolling in LA:RISE at Homeboy, Enrique faced long-term unemployment and unstable housing. He began working at their social enterprise Homeboy Industries where the staff says he was focused on his future starting on day one. In addition to completing his transitional employment, he took advantage of a variety of wraparound services, including mental health therapy and life skills classes. After sharing his desire to continue his education, Enrique was referred to an Academic Coordinator who helped him enroll in Los Angeles Trade Technical College. In addition to pursuing his education, transitional employment, and other services, Enrique volunteered with youth in his spare time and worked with Homeboy staff on the facilitation of several support groups. Following completion of his transitional employment, Enrique applied and was chosen for a paid internship at Project 180, an organization serving the reentry population and those experiencing homelessness.

After completing the LA:RISE program, Enrique received four full-time employment offers. He selected a position as a Site Manager with First-To-Serve, an organization that provides transitional housing and supportive services to families experiencing homelessness in Los Angeles. It is a job that provides economic stability, builds on the skills he developed during his transitional employment, and allows Enrique to give back to the community.

The LA County Office of Small Business is hosting a free legal webinar series for commercial tenants throughout the month of March and April. The “Know Your Rights” webinar series is le...

On February 15, 2022, the Los Angeles County Board of Supervisors passed the Commercial Tenant Protections (CTP) Ordinance, to protect commercial tenants from harassment and retaliation. The Ordina...

Join us in welcoming the Office of Small Business (OSB) to the WDACS family! OSB joined WDACS last year as part of the County’s larger realignment effort to create two new departments oversee...